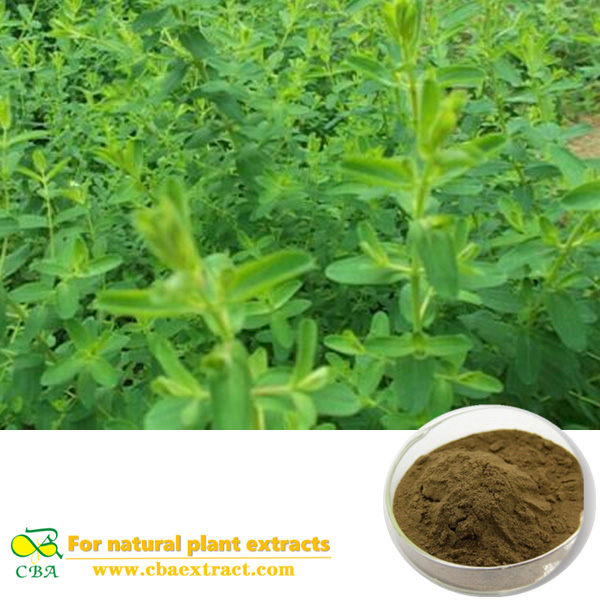 Garcinia cambogia,a small or medium sized tree with rounded crown and horizontal or dropping branches grown in the evergreen forests of the West Southern India and Sri Lanka. Leaves are dark green and shining, elliptic and abovate. The fruits are like pumpkin and of the size of an orange. The fruits are edible, but too sour to be eaten raw. They are commonly known as Malabar tamarind.
Hydroxycitric acid: HCA is a close relative of citric acid, the component that gives citrus fruits their characteristic tart flavor. Unlike citric acid that is found throughout the plant kingdom, HCA is limited to only a few plant species. HCA comprises somewhere between 10 to 30% (by weight) of the dried rind of Garcinia fruit, by far the greatest amount known from any single source.

What Is Hypericum perforatum?

1.St John's wort is widely known as an herbal treatment for depression.  It is proposed that the mechanism of action of St. John's wort is due to the inhibition of reuptake of certain neurotransmitters.

2.St. John's wort is also being studied for anxiety because, in some studies on depression, people taking St. John's wort also reported an improvement in anxiety.

3.St. John’s wort has also been suggested as a possible treatment for OCD because the same medications (antidepressants) are often used for OCD, and because of promising results from a preliminary study. A later study on St. John's wort, however, didn’t find it more effective than a placebo for OCD.

5.St. John's wort is being explored for smoking cessation. Although promising, well-designed studies are needed

Studies have supported the efficacy of St John's wort as a treatment for depression in humans. A 2015 meta-analysis review concluded that it has superior efficacy to placebo in treating depression; is as effective as standard antidepressant pharmaceuticals for treating depression; and has fewer adverse effects than other antidepressants. The authors concluded that it is difficult to assign a place for St. John's wort in the treatment of depression owing to limitations in the available evidence base, including large variations in efficacy seen in trials performed in German-speaking relative to other countries. It is proposed that the mechanism of action of St. John's wort is due to the inhibition of reuptake of certain neurotransmitters.

In Germany, it is sometimes prescribed for mild to moderate depression, especially in children and adolescents.